The Importance of Immune Health 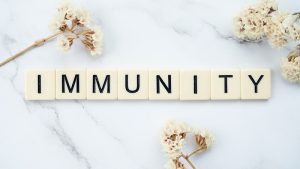 We’ve all been there. Your throat starts to itch, your nose gets sniffly, and you’re suddenly fighting a severe case of sneezes. There’s no doubt about it: You’re sick!

You could be dealing with anything from the common cold to a more severe health condition like pneumonia or the flu. Still, one thing is sure: Your body needs some extra TLC. When you do get sick, all you probably want to do is curl up in bed and sleep all day — but that’s not always an option. You still have work to get done, kids to care for, and pets who need walking.

But why do we get sick in the first place? We’ll discuss these things and more below!

Your immune system is a group of soldiers in your body. They protect you against germs and attacks that could hurt you. When your body has a cold or the flu, the soldiers fight back so you won’t get worse and die.

The innate immune system. It is the body’s first line of defense against invading germs and includes:

Your immune system is the body’s shield against disease and infection. It comprises different organs, cells, and proteins that work together to fight off infections. It is a complex system that balances between being protective and tolerant to self-antigens (i.e., molecules produced by the body itself) while remaining ready to attack foreign antigens when necessary.

The immune system keeps a register of all the substances usually found in the body. These are called antigens. If foreign substances (antigens) such as bacteria, viruses or toxins enter the body, the immune system reacts by producing antibodies and activating specific cells to attack them. The immune system then remembers these antigens so that it can fight off any future infections more quickly and effectively.

A healthy immune system defends against disease-causing microorganisms (such as bacteria and viruses) while also protecting from infection and injury. Immune health is vital for maintaining optimal health and preventing illness, including seasonal threats such as colds and flu. Maintaining a balanced diet with adequate nutrition levels, limiting stress and practicing good hygiene are some ways to keep your immune system in good shape.

Components of the Immune System

Your immune system is a cluster of organs and cells that work together to defend the body, especially against invasion by potentially harmful microorganisms. The main components of the immune system are:

Blood and tissue fluids
If a pathogen evades the first line of defense, it encounters a second line of defense: blood and tissue fluids. These fluids contain substances that can kill pathogens or impede their growth. They also contain cells that attack pathogens directly or cause them to clump together so they can be more easily removed from the body.

Cells (such as leukocytes and lymphocytes)
The third line of defense — cells that attack pathogens specifically — consists primarily of leukocytes, or white blood cells (WBCs). There are several different types of WBCs in the human body; all perform some function against infection.

Importance of a Healthy Immune System

It protects the body against potentially harmful microorganisms. If the immune system is weak or lacking in any way — as in immunodeficiency disorders — a person may be more likely to contract an infection, have trouble fighting off infections or develop other health problems.

Your immune system is constantly monitoring your body for any signs of trouble. When it detects a problem, it sends out an army of fighter cells to attack the threat. If you have a healthy immune system, you’re better equipped to fight off colds, the flu, and other illnesses.

Even though we are constantly exposed to germs and diseases, most people do not get sick very often. This is because the immune system can recognize and destroy many of these harmful invaders.

Common Disorders of the Immune System

Inherited disorder
In these cases, you inherit abnormal genes from one or both parents that impair the function of your immune system. Examples include Wiskott-Aldrich syndrome, severe combined immunodeficiency (SCID), DiGeorge syndrome, and cartilage-hair hypoplasia.

Acquired disorders
In these cases, something disrupts the normal function of your immune system later in life. Causes can include HIV or AIDS, certain medications and cancer treatment such as chemotherapy or radiation therapy, organ transplantation, and poor nutrition.

How Can You Help Your Immune System?

Our immune system is an incredible network of cells, tissues and organs that work together to protect you from illness and disease. It’s most effective when it’s healthy, and you take care of it.

The immune system is an integral part of your overall health, and it’s one worth taking care of. Knowing more about it can help you keep it in proper working order, to keep you and your family healthier overall.

VISIT OUR STATE OF THE ART OFFICE

REQUEST YOUR NEXT VISIT TODAY!